I really appreciated the hospital's allowance to give me time with the baby first, before all the tests and measuring were required.  However, it's also the reason that for about 40 minutes, we didn't know anything was wrong.  Paul happily called his parents and then the kids.  We told Kelsie that he would be there in a few minutes to pick them up.
My next priority was to get an adequate picture.  It didn't work out. I should have brought my mom. 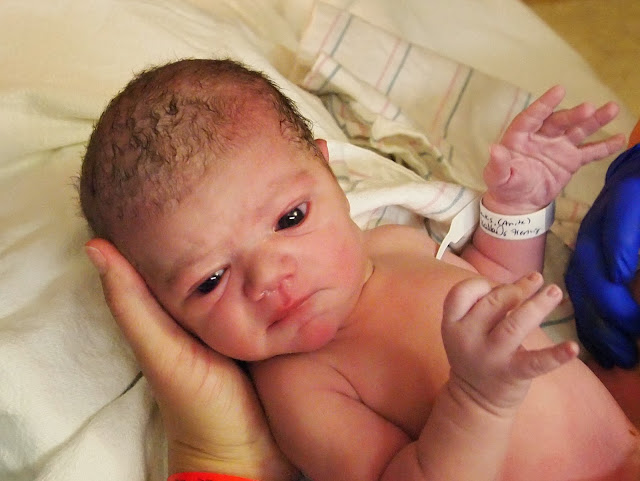 This picture was taken before the nurses took him to the table, and you can see that the cyanosis is subtle.  There's also something different about the color around his lips.
At 5:00, the pediatric nurses arrived.  They put him on the warming table, and began to buzz around him.  They weighed him, took his footprint, and noted that he was cyanotic .  Out of the corner of my eye, I watched a nurse listen to his heart.  She started talking to the other nurses in hushed tones.  I caught Paul's attention and nodded in their direction, wondering if something was wrong.  To test my theory, I cracked a joke. And that's when I knew.  Something was wrong.
A NICU pediatrician was called in.  This wouldn't be the last time a nurse saved his life by knowing when to report that something was off. The pediatrician listened to his heart for several minutes with a stethoscope; gently pressing, waiting, listening, lifting, pressing .... They attached a sensor to his toe and noted low saturations on his pulse oximeter (his oxygen was reading 76%).  When they told me they heard a murmur, I had already decided to let them take him away.  (For someone adamantly opposed to "sending the baby to the nursery" I surprised myself.)
But this was an easy decision. 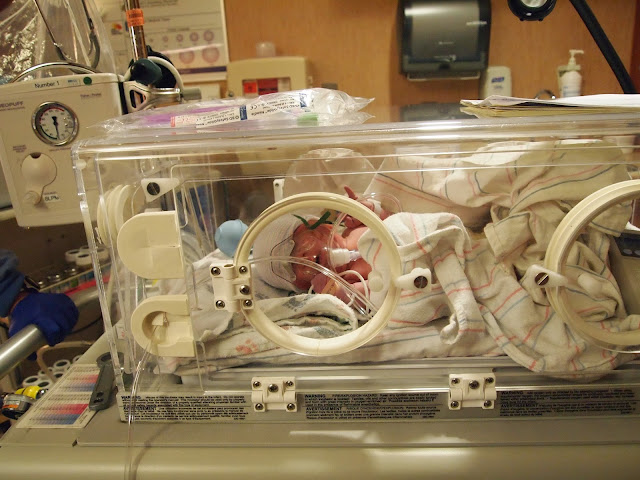 When they exited with him, he left a vacuum in the room.  There seemed to be a gaping hole where he had been.  I stared at the hospital phone, waiting for news from the cardiologist.  They moved me to a recovery room on the NICU floor, to be closer to him.  The call we had been waiting for came with news that they were going to rush him to Le Bonheur Children's Hospital.  I was told his arteries were transposed and it didn't take any explanation before I could picture the problem in my mind:

"That sounds bad," was my abrupt reaction, and I waited for someone to contradict me. I thought of his blood, circulating over and over in his heart, trapped. "That sounds really bad." Someone nodded quietly.  "It is."
We had a few minutes to ourselves.  Paul snapped open the laptop to confirm what he already knew. I grabbed the camera, missing him, only to realize that we had almost nothing to remember him by.  2 or 3 blurry pictures, one footprint, and a newborn hat that had fallen to the floor in the scuffle: were these to be my only tangible memories of his life?
My nurses there on the 3rd floor, Denise, Joyce, and Lori, were very considerate during my short stay.  I'm sure they cut corners for me so I could be discharged sooner.  They were very supportive.  The cardiologist came by, and the NICU nurses who were looking after [G].  I started to lose composure.  They choked back tears themselves as they tried to answer our questions and offer encouragement.
The transport team had him packed up, ready to transfer to Le Bonheur.  We were told that they would bring him in to say goodbye and I couldn't wait to see him again.  I felt strange: excited, buzzing with energy, but not sure what do about it.  I was full of happy hormones (I had just given birth, and was hardwired to feel good about it), and I wondered blankly if I should feel ashamed that I felt happy. I felt myself to be an observer of the situation, instead of a participant.  When you're living a nightmare, it's hard to convince yourself that it's real. 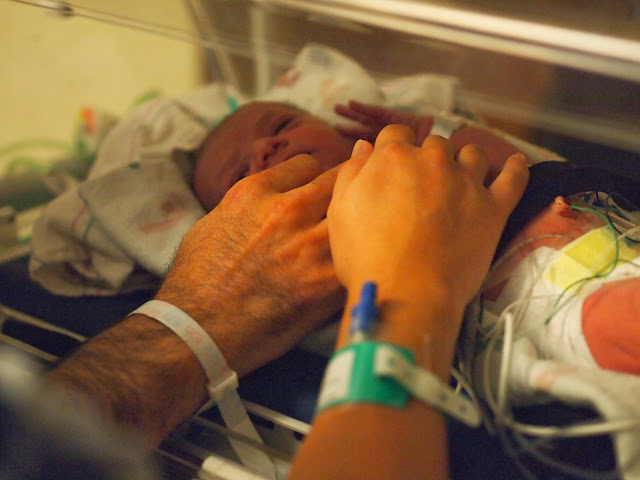 When I saw his face again that night, the mother in me took the reigns.  I was his mom, and he needed me.  Was he scared?  Was he uncomfortable?  Did he feel as lost as I did?  We didn't speak much; I didn't know what to say, nor do I remember the words I found.  I hoped that in my familiar voice he would find some comfort and that it would anchor him in the long night ahead.
His visited lasted a minute or two.  I wanted him to get better, and soon.  We said goodbye. 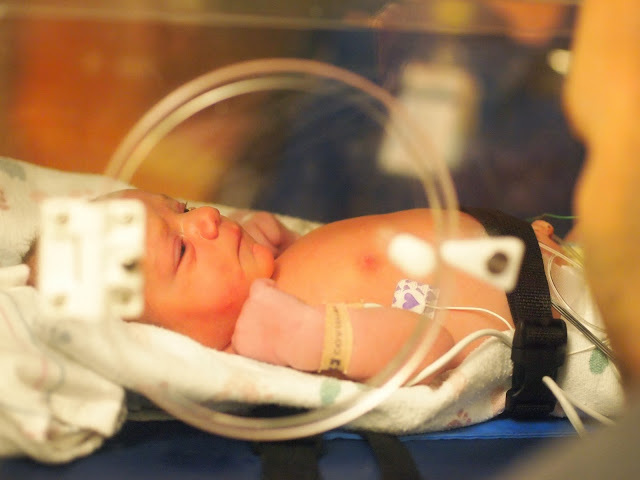 The hospital staff gave us some room, dimming the lights on their way out.  Remembering my responsibility to keep my family informed, I felt as if I had squeezed my finger into into the dike of emotions protecting the outside world from a wall of terror.  "We need to call Kelsie,"  I managed. "and my parents.  And yours." That's when my finger in the dike began to fail and the floods pushed forward.  "You call--I can't."  I listened as Paul broke the news: to Kelsie, whose own great loss 9 months earlier must have felt unbearably near, and to our parents, whom I could imagine holding our hands even from so far away.
He kept the calls brief and tried to sound calm even though I could see on his face that he could barely speak.  He clipped the phone shut and we let the dike break, alone but at least together.
That night was long, and empty, and strange.  I started pumping, determined to do what I could to help.  Two meager drops of colostrum rolled onto the bottom of the bottle.  Then I went dry.  I just couldn't convince my body that there really was a baby, he was just away for awhile.
Paul slept deeply on the couch--at least, it seemed so from my perspective.  I kept pumping throughout the night, but it was the utmost need to go to the bathroom every 40 minutes that kept me awake.  I was swollen with extra fluid from the epidural which my body decided it needed to discharge.   I didn't know it was humanly possible to pee that much.
The night was cold and sleepless and lonely, but the endless walks did help me to recover quickly.  I wanted to get out of there, to be with my baby.  I've always had tense sleep after giving birth: you wake up, and you know there's something you're supposed to do, someone you're supposed to take care of, but you can't quite remember who, and then you remember the pain and the joy of the day before and you listen, clearing away the unfamiliar nighttime sounds of the hospital room, until you hear that newborn baby, yours, beside you, breathing.  Only on this night, he wasn't beside me at all, and it was just me breathing.