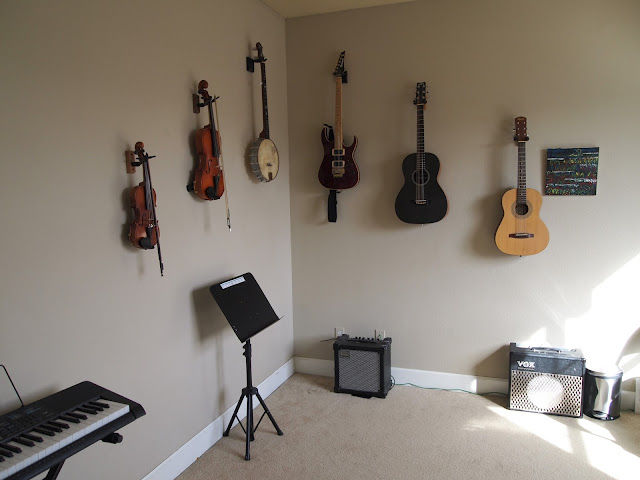 The kids have improved a lot this year because of their viola teacher.  I taught them what little I could, and then finally called up our local music academy.  "I think it's time for a real teacher," I told them, "because we have been practicing every day all summer and they are actually getting worse."  We ended up with an amazing teacher who seems to understand my kids in ways I don't.  He's funny, interesting, and kind, but still manages to get them to work hard.  I work harder too.  In fact, he asked me to keep up with them for at least the first year, because having practicing be a family habit helps them learn. 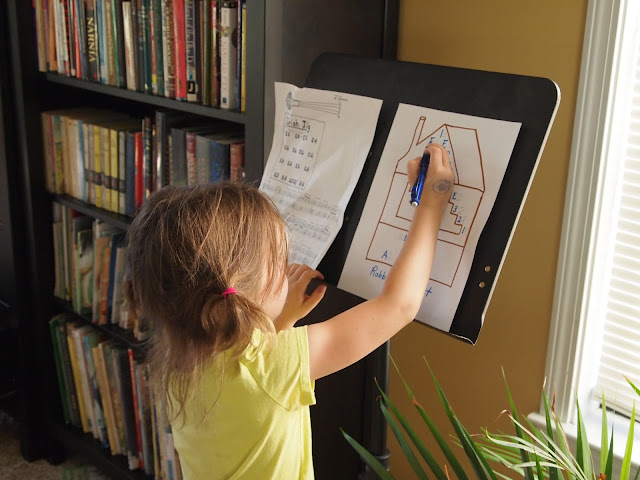 Figuring out the Twinkles, when we started about 2 years ago. 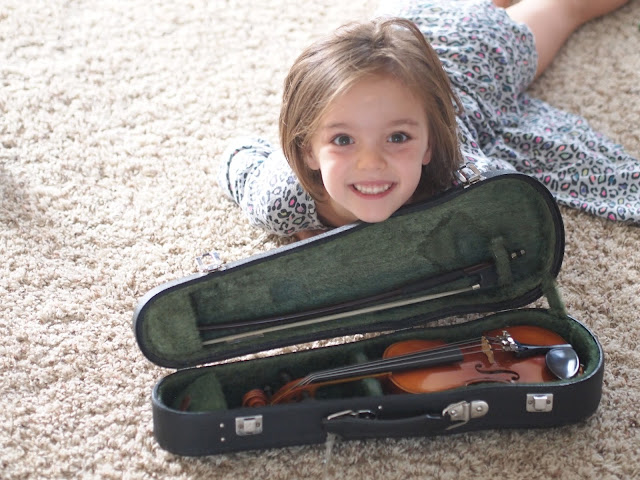 This must have been a 1/32 violin.  I rent the instrument through Music&Arts. 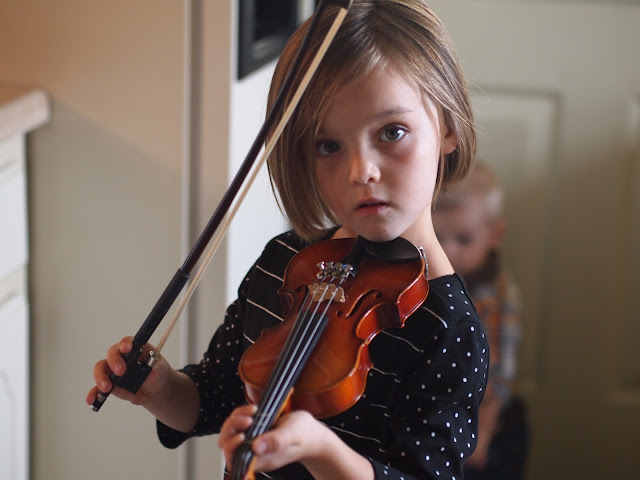 Now [C.] has been playing for about 2 years, with 4 months of lessons in Memphis, then a break for the move, and 4 more months of lessons.  [A.] began with me when school started in September, and then started formal lessons in November. I love seeing how they each have different strengths.  [C.] can play with emotion, and having someone join her with an accompaniment gets her even more jazzed up.  [A.] can clap out complicated rhythms like a rock star (well, I guess a drum player would be a better analogy), and can sight read a simple song with accuracy the first time he plays it. 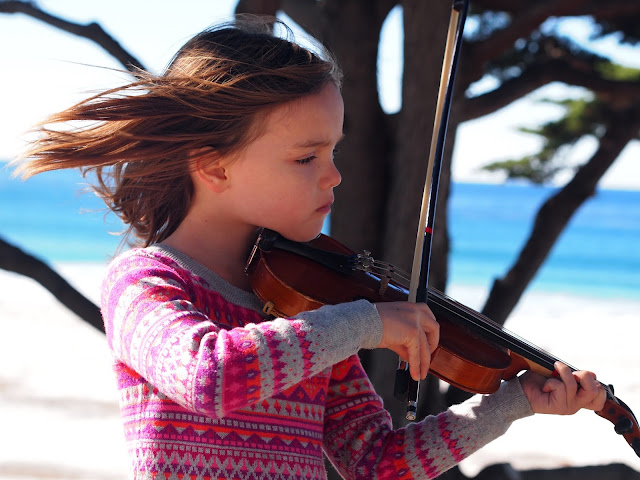 [C.] is still too small for an actual viola, so we had a 1/16 violin restrung as one.  My strategy is that viola players get more opportunities to play socially because they're in higher demand.  They can always switch to violin later (or another instrument for that matter).

I was not prepared for how much work practicing would be.  I'm very involved as they practice.  They're gradually becoming more independent, but if I left the room they would definitely goof off too much.  This is hard work, especially as they're learning how to hold the instrument and read the notes.  It's a steep learning curve.  I think if we make it a high priority (it's right up there with learning to read) this year, they'll get a taste of what's possible and we can relax about it next year.  I'm also really motivated because I pay for the lessons :)

Teaching them to play an instrument has changed my relationship with each of them.  I have so much respect for what they are capable of.  They are so smart!  I'm in awe.  It's been an emotional journey, since I'm pushing them to admit mistakes and correct mistakes and strain their brains.  But listening to them play; I catch myself enjoying the sound and I love to be surrounded by it.  It is just cool to watch them get better. 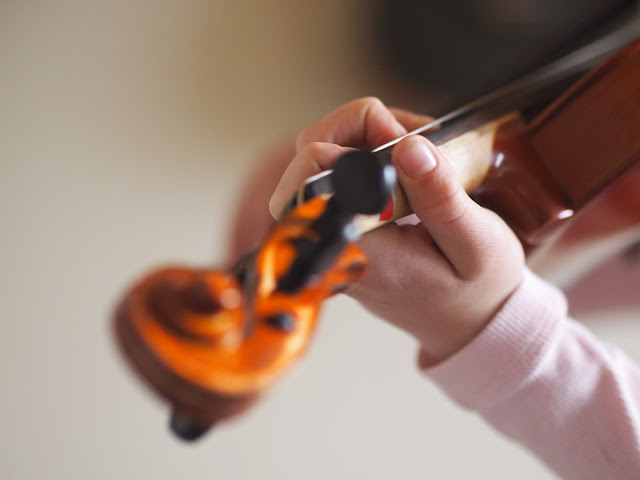 (Quick side-note, [G.], the two-year-old doesn't have an instrument his size, but he just "plays" anyway.)

(Disclaimer: I just realized that this is the only school subject for which I blatantly use bribes.  I keep a little monthly calendar and check off the days they practice.  We set a goal at the beginning of the month for obtaining a certain number of check-marks before the month ends.  As they reached their goals, earning a toy off Amazon (with a price limit), I gradually increased their goals until I was happy with the amount of practice they were doing.  Now they're only allowed to miss 5 days of practice in a month, and on the first we start over.  It's almost a habit, but I have a hard time on weekends.)

In addition to viola, we include music in a few other ways:

Music Time
This is something I added to our curriculum just for [G.], though we all enjoy it.  For 15 minutes twice a week, we sit down and sing songs together.  It's amusing to see how much the older two get out of it-- I finally have a choir to help me, because unlike our toddler, they know the words.  It improves everyone's memories.  And, [G.] is adorable. 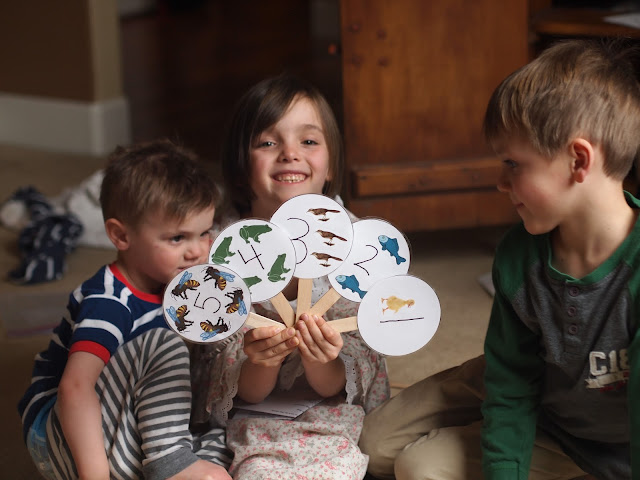 Over in the Meadow

When I remember a fun action song or fingerplay or recording, I write down the title on a Popsicle stick.  The kids take turns choosing one from one container and then putting it away in another.  In that way, we rotate through.  I have to have four sticks labeled "Drivin' in the Car," though, because that is [G.]'s all-time-favorite.  (For the record, this song was also [C.]'s favorite and [A.]'s favorite when I did Music Time with them.)  Sometimes I have little props that go with the songs.  We keep all this together in a cupboard. 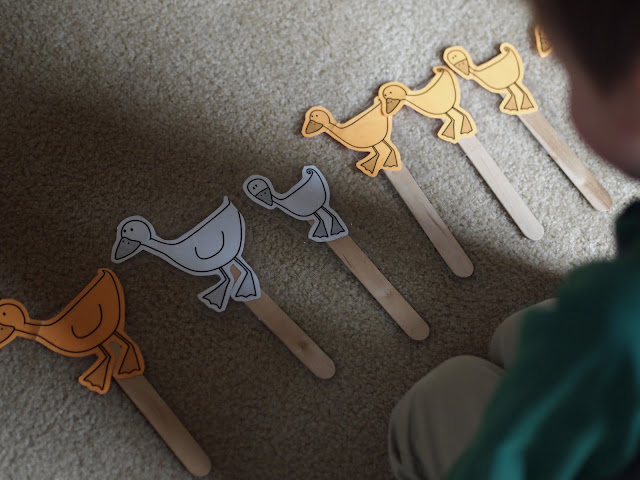 We started out with just three songs or so, (that's all they need; they love repetition) but the list has grown and there are still so many out there.  We have some oral stories thrown in as well.  Here is my anthology, if you're interested: (excuse my lack of accreditation, but in my opinion most of these are such oral tradition they would be considered "in the public domain" anyway):


I have a special anthology that I bring out only at Christmas time, which I won't bother to list.  You get the idea. 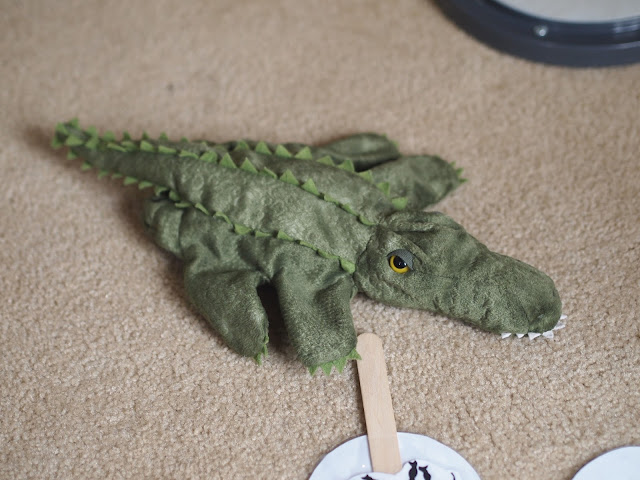 Story of the Orchestra
This is a book my mom gave me that gives a great historical explanation of classical music.  It came with a CD.  We are working through it in bits.

Classical Music
I love lunchtime freebies!  While I'm cleaning up lunch every day I turn on classical music.  I have two playlists on my phone that I alternate: one is comprised of only Suzuki songs (to aid them in viola [and boy does it help]), and the other is classical music I have selected.  There are some pieces that are well-loved by children, and my children love them too.  They dance and play and goof around whether it's Vivaldi or Beethoven or Prokofiev.  Playing classical music is the kind of effortless thing I would always say I would do, but wouldn't... now we actually do it, daily, and it's because it belongs to the time I am cleaning up lunch.


Here are some examples of [C.] and [A.] playing viola during a typical practice routine:

See what Music looked like at our house two years ago.