7/28 Day 3
We finally were able to introduce [C] and [A] to their new baby brother.  (Or was that the day before?)  They were so happy to see him!  Marie took our kids to church and had them over at her house after.  I had some time "alone" (with a faithful nurse coming in for every beep).  It was the closest I had come to having those quiet moments of wonder near the baby's side that help you become a mother.  I was so grateful for the time to think.
That morning, I made it to "rounds" for the first time.  Rounds were like the tides of the hospital.  In the morning and evening, they ebb and flow with waves of doctors and nurses updating new waves of doctors and nurses.  Information passes hands and strategies are agreed upon.  Sometimes the waves crash with some turbulence, for after all, each swell has it's own identity and sense of hierarchy; but there is always a hush of consensus and common understanding before the wave recedes.  I looked forward to rounds.  Throughout our stay, everyone was very considerate to explain things to me.  They spoke to my level (which to them, probably felt like talking to a 3-year-old) and made sure my questions were laid to rest.  But during rounds, they first spoke to one another on their level.  I learned a lot by observing those conversations.  Although the terminology was beyond me, it was easier to see the nuances of their communication as an observer; which numbers worried them, which test results were disappointing, which milestones made them want to cheer.  I could tell who was fresh and who was exhausted.  I could sense (with relief!) when [G] had recovered enough to be considered a lower priority.  More often than not, their genuine smiles implied that [G] was doing well; that he was on the right track, that they knew what to do to help him get better, that he would get better.
That morning, I met Dr. Knott-Craig, the cardiothorasic surgeon who, with Dr. Kumar, would perform the arterial switch.  (If it sounds like a magic trick when I phrase it that way, well, it is.  No tricks, but definitely magic :)  Dr. Knott-Craig has even written a collection of poems.  You can read a few excerpts on his website.  I won't reprint them here because I haven't asked permission, but I will say this: he amazes me. 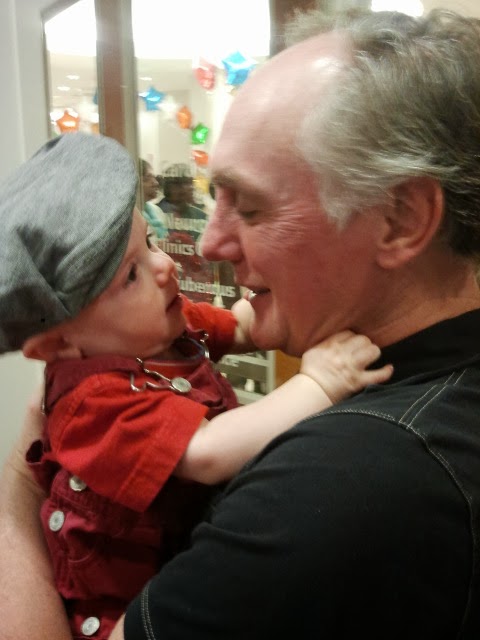 (Dr. Knott-Craig with [G] at the reunion. [G] just loved seeing his doctors again.  He smothered them with slobbery kisses. He reached to them, clung to them, and rested his cheek against them happily.  The connection was undeniable.)
We had so many doctors that it is certain some names have slipped my memory, but we are so grateful to them all.  Dr. Figueroa was his cardiologist while at the hospital, and we saw her every day.  She really helped his recovery through all the ups and downs.  Others were Dr. Kumura, Dr. Sathanandam, and Dr. Rice.  As I look back, I can't always keep track of who did what and there are nameless faces that did so much for us.  Besides doctors, there were committed anesthsiologists, ultra-sound techs, therapists, fellows, residents, and people working behind the scenes that contributed to [G]'s recovery.  We were so lucky to be surrounded by so many intelligent and talented people.
After rounds that day, things quieted and I was able to hold him for the second time.  Oh, the things we take for granted!  It took several pairs of trained hands just to place him in my arms without yanking out any of the cords.  I had the sense that they knew that we were taking some risks moving him but that it was so very important anyway.
Later I had a few moments to write:
You sleep peacefully beside me.  Your chest rises and falls gently, steady except for the subtle way it rides along the motions of your dreams.  I know so little about you and your future; I am shielded from it the same way your hospital bed with all of its tubes and wires shield you from me.  And yet--you seem to peek through the veil from behind that newborn smile and I know you'll be okay. This I do know: you are important.  You have a work to do and you will do it well and with intensity.  I love you, my little one.  I am sorry we have this canyon wall to climb, (it is more than a bump in the road) but it seems like you brought all your climbing gear with you; and forgive me for my weakness, but you are stronger than I.  Teach me.  I am ready to listen.
I longed to take him outside, to show him the earth.  I began to sense the possible finality that a scheduled surgery entails, and wanted to make the most of this last day.  I couldn't get the words of e.e. cummings out of my mind:

"i thank You God for most this amazing

day: for the leaping greenly spirits of trees
and a blue true dream of sky; and for everything
which is natural which is infinite which is yes

(i who have died am alive again today,
and this is the sun's birthday; this is the birth
day of life and of love and wings: and of the gay great happening illimitably earth)

how whould tasting touching hearing seeing breathing any -lifted from the no
of all nothing -human merely being
doubt unimaginable You?

Paul arrived at the hospital, toting this little monkey along: 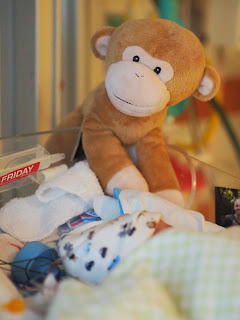 I worried that [G] and I wouldn't bond the way we should, having spent his first night in separate hospitals, and me not being able to feed him or hold him.  So when he tracked the sound of my voice and made eye contact with me for the first time, it felt miraculous.  He knew me.  The baby in the bed was not manufactured, he was crafted.  We had cohabitated the same small space for nine months, sharing sounds and smells and stress and warmth.  His eyes found me and it was as if he were saying, "now there you are!  I've been looking for you." 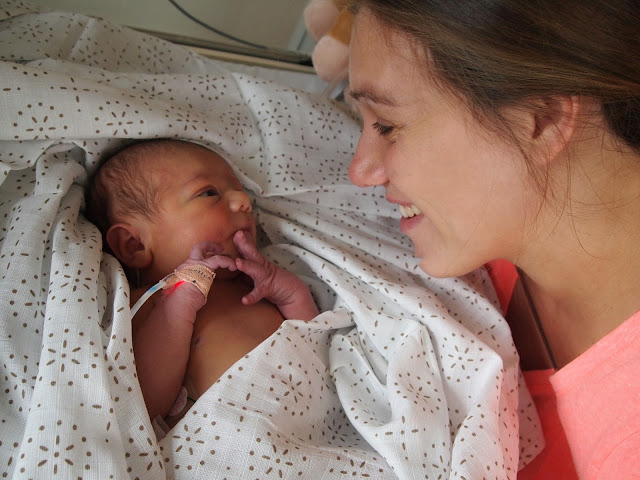 That afternoon is a blur of visitors and tests in preparation for surgery.  What's his blood type?  Does he have any jaundice?  Is it time to take him off nutrition?  Sarah arranged child care for her own children and came to the hospital.  Paige visited, and our bishop and his wife Cheryl. Ryan made arrangements to come as well.  Mostly, we just enjoyed [G]'s company and tried to write the experience in our hearts. 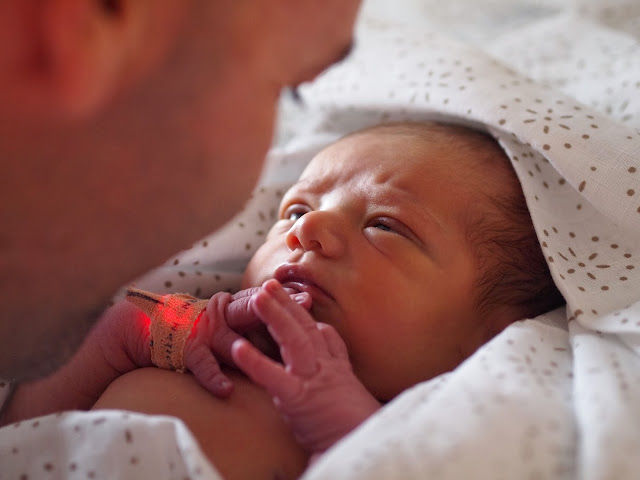 Paul went home that night to put our kids to bed.  They called to sing him a lullaby.  I put the phone on speaker and they sang their hearts out.  It was adorable, and anything but soporific.  They loved him so much, despite all the upheaval his arrival had cost them.  Their song filled the dim room and could probably be heard down the hall.
I don't know why everything changed after their phone call, but [G] seemed agitated and an alarm started going off.  It was that sensor, stuck to his toe, that always seemed to give us trouble.  It monitored oxygen levels and it just didn't like to be wiggled.  The nurse fidgeted with it diligently.  If it had been me, I probably would have turned the alarm off in annoyance and chalked up it's cause to a bad reading.  She didn't.  She changed the sensor for a new one and that's when we realized oxygen levels had dropped suddenly from 94 to 86.  It was about 9:00.  His body had had enough.  The ASD was closing, and there was nothing his medication could do about it.  His heart was pumping away, but the oxygen wasn't going anywhere.
Time for "Plan A, Contingency B," a cardiac catherization for an atrial septostomy .  In about a minute, there was a surgeon in the room.  He was there after hours doing research.  He consulted with the nurse and in about 3 more minutes there was a team of doctors in the room, all making phone calls to assemble everyone they needed.  They asked for my consent and I remember feeling so scared and inadequate.  I wanted Paul to be there so I didn't have to be the only one responsible ... so I didn't have to be the only one to say goodbye. How could I handle facing Paul the next day if they never saw eachother again?  Perhaps I'm being dramatic.  A balloon procedure is very common.  They would place a catheter up his right femoral vein, and blow up a balloon in his heart to keep the hole open so that enough blood would be able to mix and keep him alive long enough for his arterial switch the following day.  They weren't even slicing him open.  Still, I was scared.  I placed a nervous call to Paul, who kept vigil with me from home.
The hospital staff did a fabulous job and I got to see the other side of "being on-call," since many people were called to come in from home.  At one point, the doctors and I were at his bedside waiting for the team to assemble.  I was in a bit of a haze, only partially listening while they punched things into their smartphones in preparation.  Probably someone had typed in "septostomy" and it was auto-corrected to "septuagint" because I remember the doctors questioning each other blankly and then hearing myself pipe in, "Oh. I know what that is."  (It is rare for my bizarre education to be validated in the real world.) It was the only time I was able to teach them anything, but I felt helpful for a moment, even if ancient Greek manuscripts have little to do with heart surgery.
They held off all nutrition from [G], even sugar water.  He didn't get anything until the 30th.  Can you imagine being a 2-day-old creature who is deprived of your next 24 meals?  That would be like me not eating for 8 days.
At about midnight, the procedure was over and they brought him back to me. 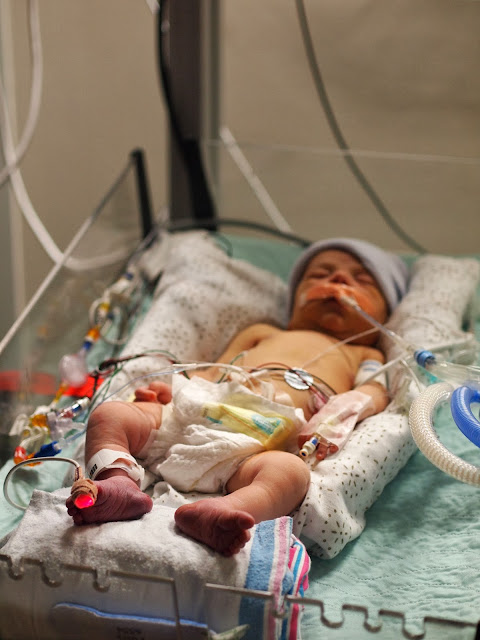 Doesn't that just make you want to hold him?  In fact, I think I will go do just that.  To be continued.