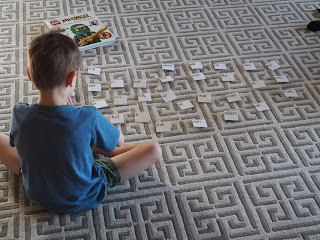 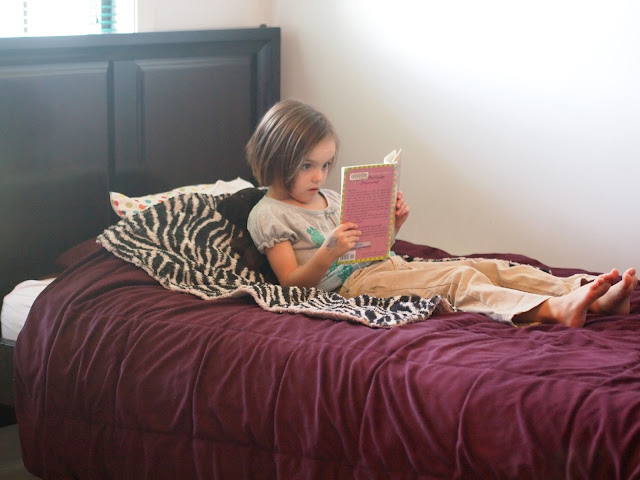 This subject is a simple one this year, because my 7-year-old is an "independent" reader, my 5-year-old is an "emergent" reader, and my 2-year-old is an "aspiring" reader.  So at the moment, no one is doing the hard work of breaking the code of the sounds that form our written words.  It is hard work: worthy, frustrating, and edifying hard work.  I've learned how important it is not to give up.  This experience taught them how to become someone.  They had to stretch themselves beyond what they were capable of.  They learned that they could. 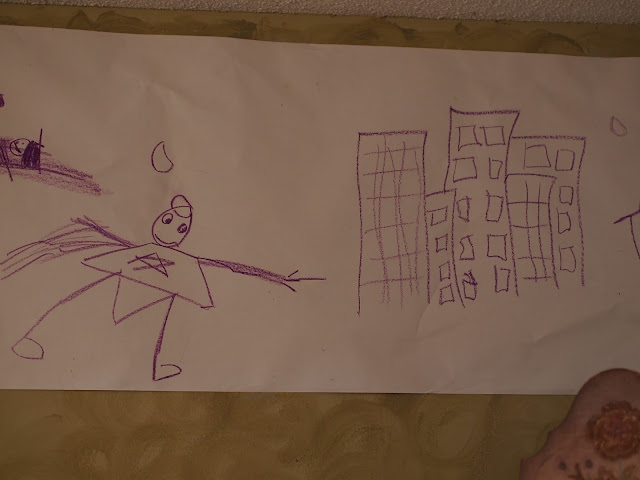 Above: a segment of the 20-ft mural we made with our co-op of Harold and the Purple Crayon 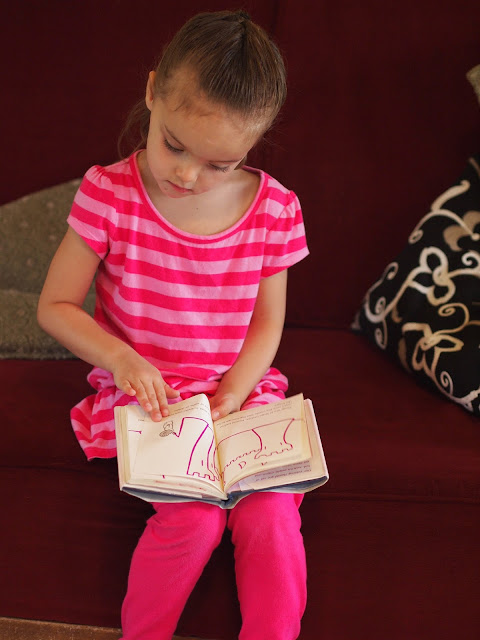 For reading, I wanted to make sure that both my elementary kids are reading to me one-on-one.  My independent reader is also expected to read by herself.  They all read to one another, a thousand times a day.

I continue to have [C.] read to me, despite her fluency, because I noticed her comprehension was dipping after summer break.  She had started skipping over the easy words, leaving out pronouns and prepositions, or just guessing to keep up her speed.  Then it got worse: she started guessing on the difficult words too, with no one impelling her to sound them out.  She had crossed a line where the difficult words she encountered were also new vocabulary words, so she was "reading to learn" rather than just "learning to read."  In response to the hurdle, she lost interest in chapter books and was picking up literature below her interest level.  Hello, Early-Onset 4th-Grade Slump.  Having her read to me, like we used to, with me slowing her down to sound things out or to pay attention to all those little articles, fixed the problem in a couple of weeks.  This week she read most of A Wrinkle in Time on her own.  (I'm never going to be old enough to read that one, am I?) 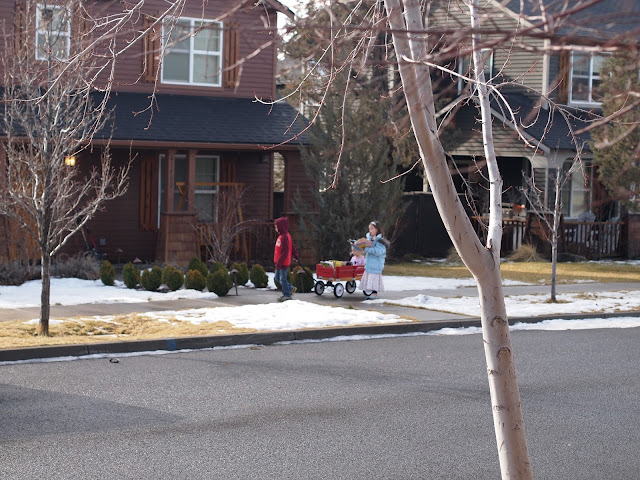 Above:  "Why are you taking all those books outside?"
"Oh, we're just going to go around the neighborhood READING to people!"


My son's struggles have been much harder to navigate.  I purposely waited until he was 4 to begin reading lessons, which at the time seemed harsh for a second sibling eager to do all that his older sister was doing. 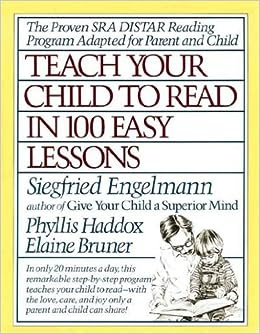 Above: This was how I learned to read, and I have loved it for my kids.  You can read the text from a sample lesson here.


He was ready to learn, although I must stress that it wouldn't have done him any harm to postpone it.  Our lessons were paced to his abilities (we rarely completed a whole lesson in one day), and brief.  He struggled through a few minutes each day, but felt more empowered because of it. 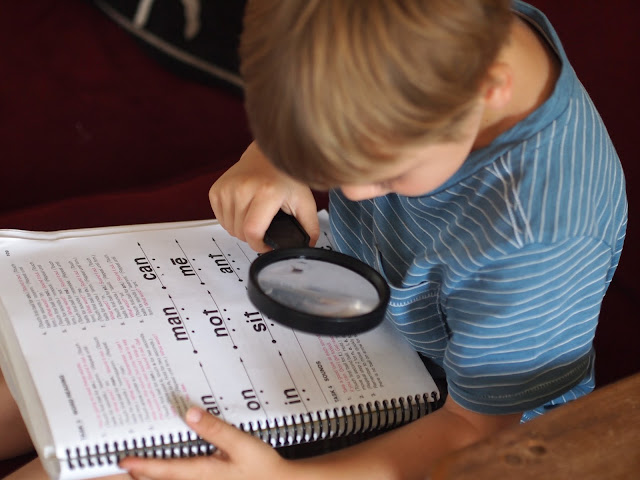 This is the child who is motivated by games ... thus, the totally unnecessary magnifying glass that nevertheless convinced him to read that day.

By the end of last year, (which I defined as Kindergarten, and the state would have dubbed Pre-K, since he didn't turn 5 till May, and if this is confusing it's because as a homeschooler who would otherwise be redshirting to get an extra year's worth of wiggles, and would therefore be teaching the "Pre-K Plus" grade this year, I get to solve this hilarious social problem by going in the opposite direction and teaching my child with material that is on his level, no matter where his peers are, because he doesn't have to compete: he doesn't have to prove himself against 25 kids ranging from a baby 5-year-old still learning how to talk and the 7-year-old who is bored to tears-- he becomes successful because he is met with material that always challenges him just a little bit, and so he both progresses and feels that he is excelling, leading to higher self-esteem and greater success, and yes, I read the book Outliers) he was on Lesson 60. 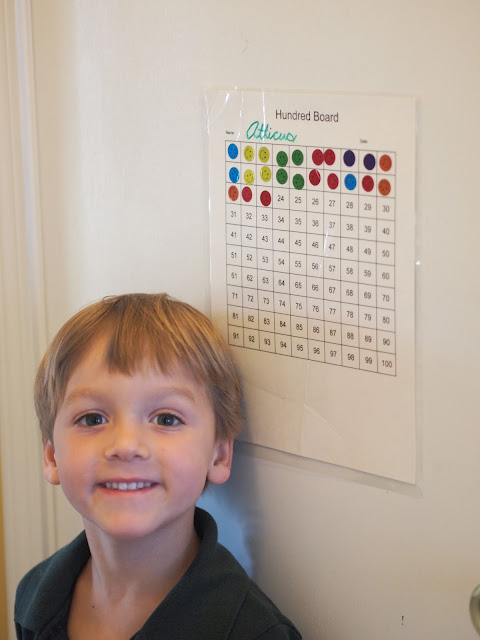 (I estimate that this level is equivalent to today's Kindergartner, assessed at the end of the year.)  We were on track for his grade, and advanced for his age.  His progress had slowed, but I wasn't expecting what happened next.

We took about 6 weeks off for summer and he forgot everything.  It killed me.  He was in agony over every word.  Was it an attention problem?  A hearing problem?  A dyslexic problem?  Had I started too soon, or too late?  Was I the problem?  One day I explained that we would back up 5 lessons, and if it was too hard, we would keep backing up 5 lessons until we got to a lesson that felt easy.  It didn't feel easy until Lesson 5.  So essentially, we started over.  Whew.  I'm sooo glad we did.  He really needed everything explained a second time.  (Big deal ... that's how I am with math.)  He really needed six more months of extra practice with the basic building blocks.  He just recently passed where his bookmark had been last spring, but the quality of his reading is miles apart.  He can read the whole story without frustration, and the majority of the words are well-known.  He is so much happier when he reads now.  He reads to himself when he thinks I'm not looking.  My point is, don't be afraid to start over.  There's no shame in practice, but there is strength to be found in determination.

And yes, in retrospect, I could have just waited longer to start the lessons, but then we would have missed all that empowerment ... 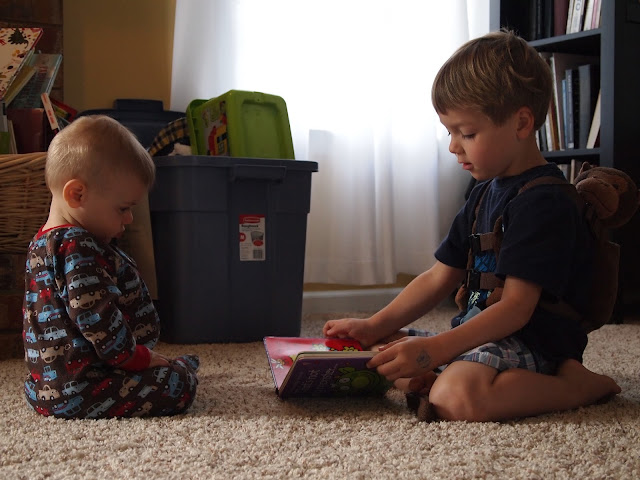 Rather than tote why I like 100 Easy Lessons so much, ('cause finding something that works for you is not my job:) I'll just give a few basic hints to those already using it:

1. There is only one picture per story, and it is crucial that you cover it up with a post-it note until the end of the lesson.  Grab a stack of post-it notes and pre-fill the whole book while you're watching t.v.

2.  When a student reads a word incorrectly, I correct them by stalling my pointing finger and repeating the last sounds that they said correctly, plus the corrected next sound.  They try again, and the process is repeated till they complete the word.  Pretend the word is "incorrectly," and they say "in-surr-ec-tion."  I repeat "/in/-/k/" and they try again: "in-car-cer-a-tion."  I give them one morsel more.  "/in/-/k/-/or/" and they give me "in-cor-rect-ly."  The goal is to let them earn it.

3.  The lessons can be cut in half nicely by doing all the exercises on one day and reading the story twice the following day.

4.  I do not use the book's writing exercises, as I prefer to use other resources for writing.

5.  Whenever you can find a "real" book that matches the skills they're working on, that isn't too advanced, save it for a supplement.  I use them as bribes to get a lesson done.  Right now Captain Underpants is doing all the bribing.

6. Definitely take your book to Office Depot (or some printing store) and ask them to spiral bind it.  It would drive me nuts to use it without the ability to fold the book. 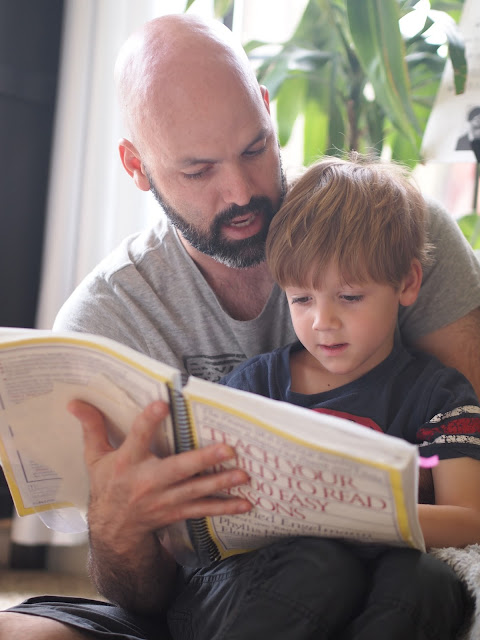 Sight Word Games
We play games occasionally to reinforce the dolch sight words, but this is minimal.  I hate it when reading programs overemphasize sight words.  It does far more harm than good by debilitating the reader when they come across a strange word.  But occasionally, we play some games to memorize common words he already knows.

My 3rd grader gets about 15-30 minutes to accomplish this task each evening.  She doesn't know it's a task though ... so please don't tell her.  She just thinks I'm letting her stay up late with the lights on. 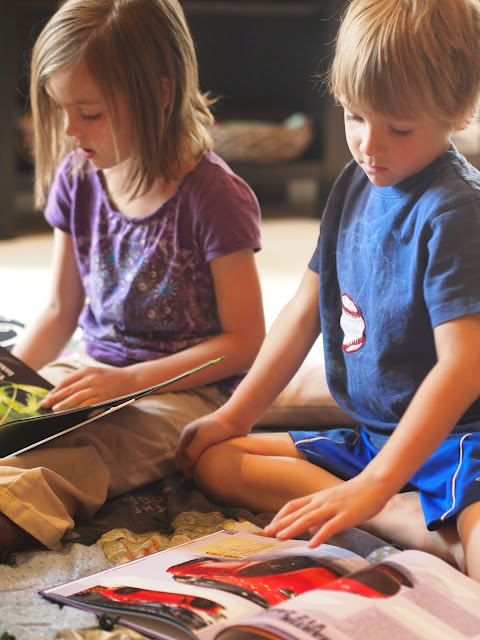 For more details about our reading curriculum, you can read my 2013 post on the same subject.  I had a preschooler then.