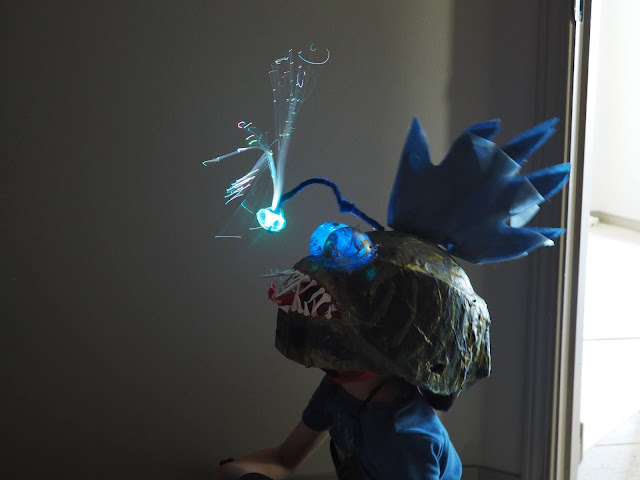 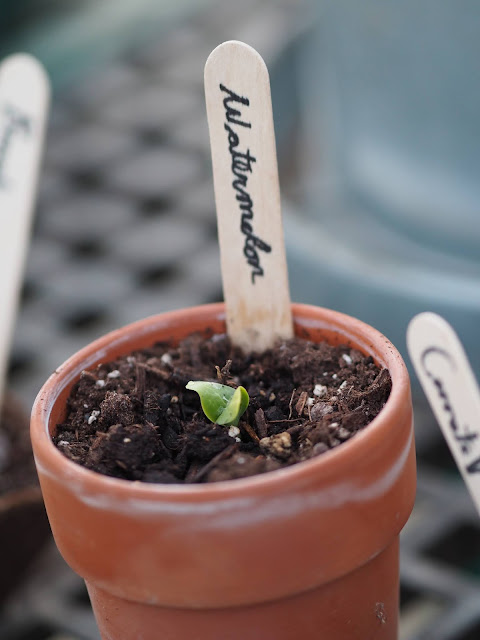 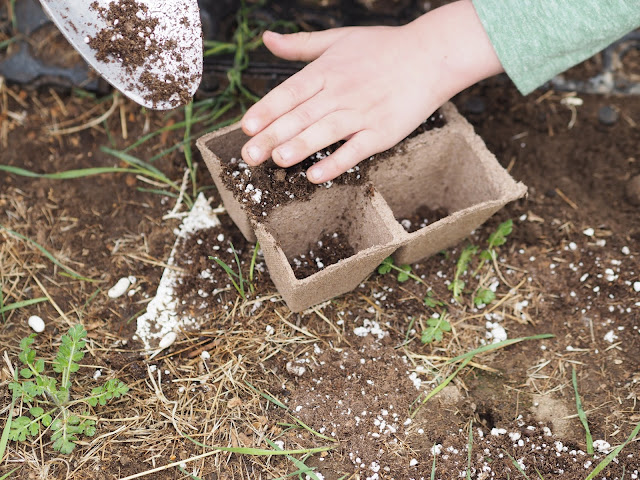 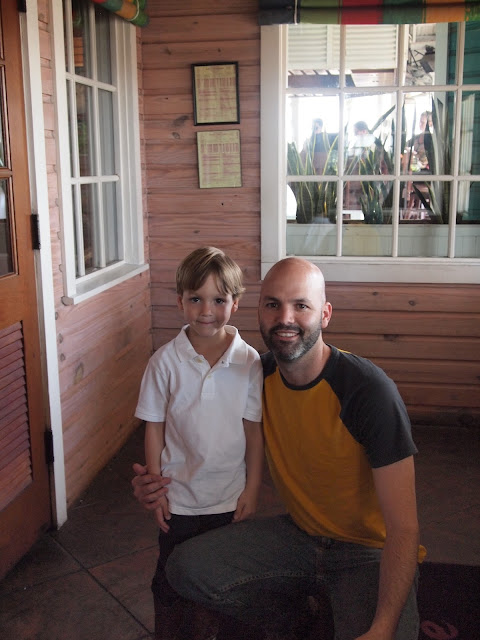 When the kids finish their mathbook for the year, we take them out on a date and leave their siblings behind.  They get to select the restaurant and order anything on the menu.  Getting both Mama and Papa to themselves for a night is a big deal :)  We use the opportunity to interview them about their academic progress.  "How are you liking school? "What is working?  What isn't?  What is your least favorite task?  What are you really interested in right now?  What should we do differently?"  We reiterate the idea that their education is their responsibility, and as parents we can be a resource to them.  We go over options, including public school.  And we always ask the big question: "Do you want to continue homeschooling, or would you prefer getting your education some other way?"  It is important to me that this be their choice. 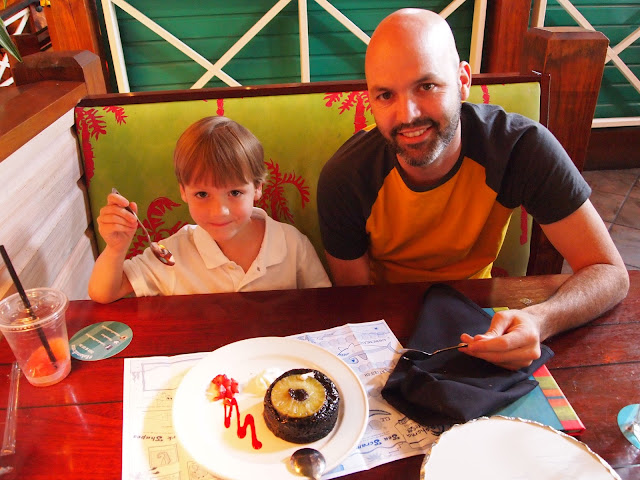 Our date is also a good time to discuss something I call their "Spectacular Project."

During our second year of homeschooling, I ran across an article written by a admissions chairperson at a prestigious university.  I can't seem to dig it up now, but he was chiding homeschoolers for producing college applications that replicated those of traditional candidates.  He said that the committee wanted to see how homeschoolers are different than traditional applicants, not how well they can imitate them.  He argued that we have all this extra time, and freedom ... use it to do something spectacular, that public school students can't do.  Anyone can come up with grades and test results. "Show us what you can do because you homeschool."

Another article I did find calls this the hook in a college application, and it's something that homeschoolers tend to be pretty good at.  "A hook is," the author explains, "ironically, something that you are passionate about and engaged in that is outside of school.  Because when you're in a room full of smart people, smart suddenly doesn't matter--interesting is what matters."

Even though college seems so far away, I wanted to make sure we weren't taking our time and freedom for granted.  So each year, the kids design an annual project focusing on something that interests them.  The planning process is important.  I use the opportunity to teach them how to plan for major goals and supporting goals, as well as how to budget time, and type up a little report about their accomplishments.  We don't need to spend a great deal of school time on these, but we do revisit the conversation throughout the year to make sure they are making progress.

Costume Design
In 1st grade (age 5), [C.] said that what she like to do best was dress up.  We ran with that and she drafted a plan: 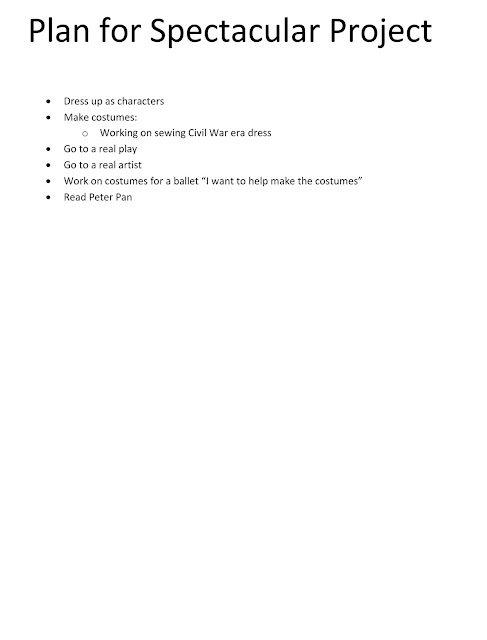 She wanted to see some real costumes.  Near the end of the school year, Ballet Memphis was performing "Peter Pan."  She read the book in preperation, and we attended the ballet together.  She was on the edge of her seat, and it was interesting to watch that it was indeed the costumes, not the dialogue or the dancing, that most engrossed her.  We talked about how important the costumes were to the story, especially since it was a ballet and the characters needed to be able to move in them.  The mermaid costumes were fascinating.  How do you dance exactly, while wearing a tail?  We got to find out later.

One of her goals was to "help make the costumes" for a play.  Internship?  She typed up a cover letter and resume and mailed it to the costume designer at Ballet Memphis. 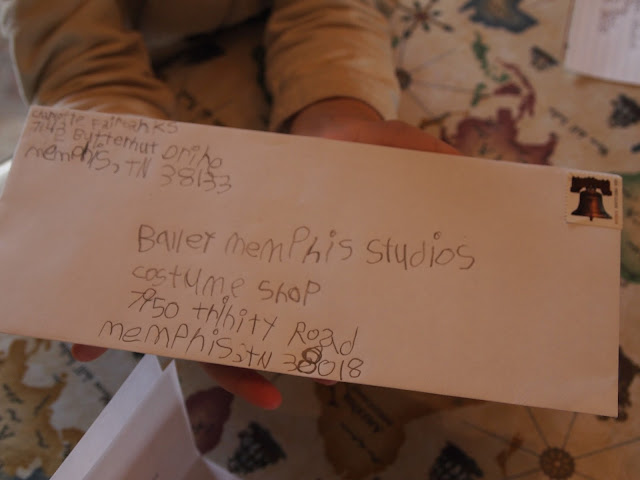 She had a lot of fun creating her resume.  She specifically insisted that the font be "rainbow colored."  I wish I had her courage. 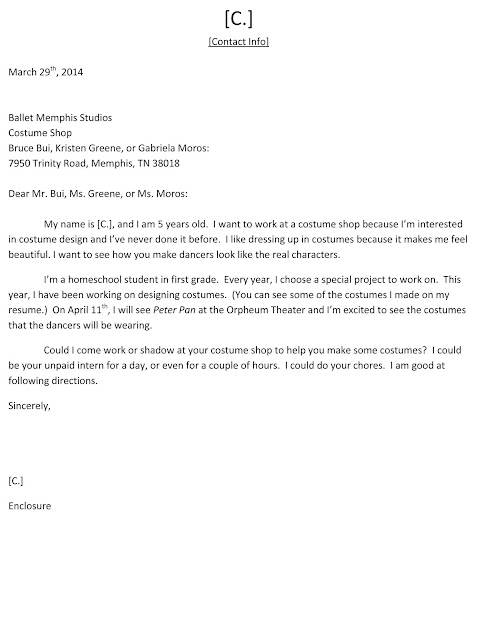 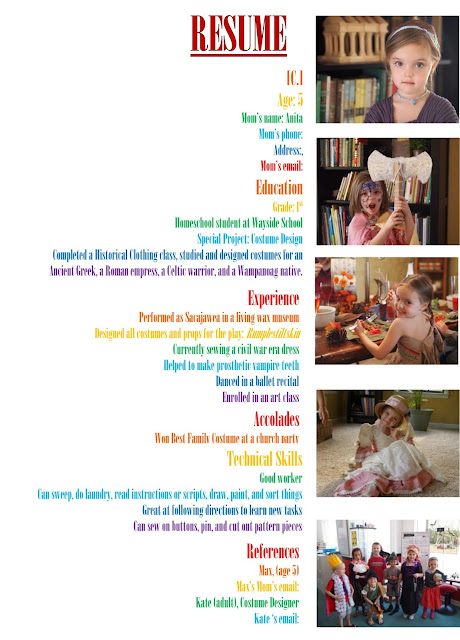 Bruce Bui caught the spirit of her supplication and she landed her first unpaid internship at a real costume shop.  The day came.  (The internship was only a few hours.)  He gave her a complete tour and explained what his job entailed. 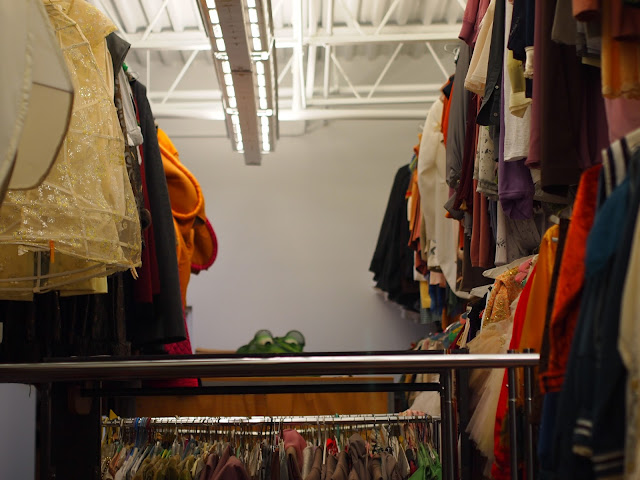 It was the biggest closet I have ever seen.  A warehouse, really.  He had a remote control to move the racks of clothes around, since there was no way to reach them all.
He showed her the sewing machines, and how to dye fabric; he dissected a ballet slipper and let her bang it against the wall so she could understand its construction; he flipped a tutu upside down and they inspected the seams to try to figure out why they puff out so much.  He asked her about "Peter Pan" and she shared her love of the Tinkerbell costume she saw at the Orpheum.  That's when he pulled The Tinkerbell Costume off the rack and let her touch it and showed her how the wings and the harness attached. 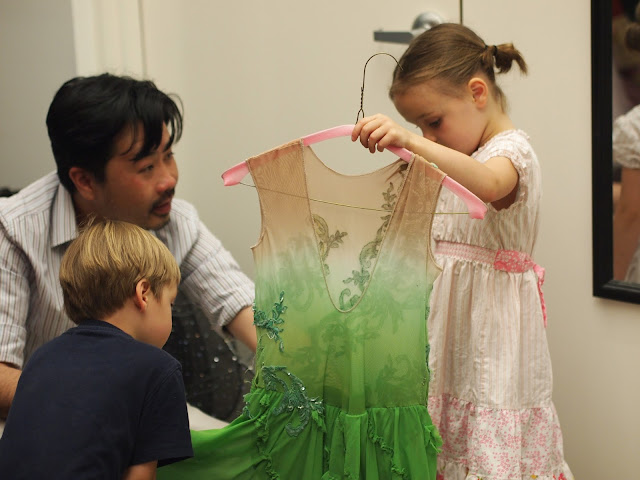 The mermaid tails only went over one leg, while the other was camouflaged to blend into the backdrop so the dancers could move in all kinds of ways.  I was very impressed by the attention he gave her, even though there was no compensation for him.  I think it made a powerful impact on her.  He led her to his research library and we were both surprised by how much historical knowledge and academic luster was required for the craft.  She asked him what she should be doing now to prepare for a career in costume design, and he told her to draw.  He showed her his sketchbook, where every costume began and evolved; he was a remarkable artist himself and we could see the design process unfold.

I never would have thought of this particular field trip on my own.  It only happened because [C.] set some goals and had the grit to dream big.
At the end of the year she summarized her project in a report: 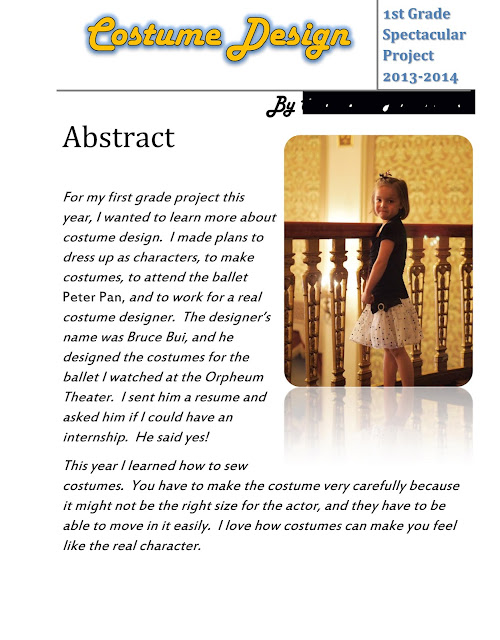 We have followed this same formula for our other annual projects: write a plan setting goals and identifying supporting goals, carry out the plan, and write an abstract.  It's a bit tricky locking my own ambitions in the closet to allow themselves to explore their way, but I'm always glad I did.

My son's Kindergarten project arose because what he liked to do best of all was play computer games.  Here is his abstract: 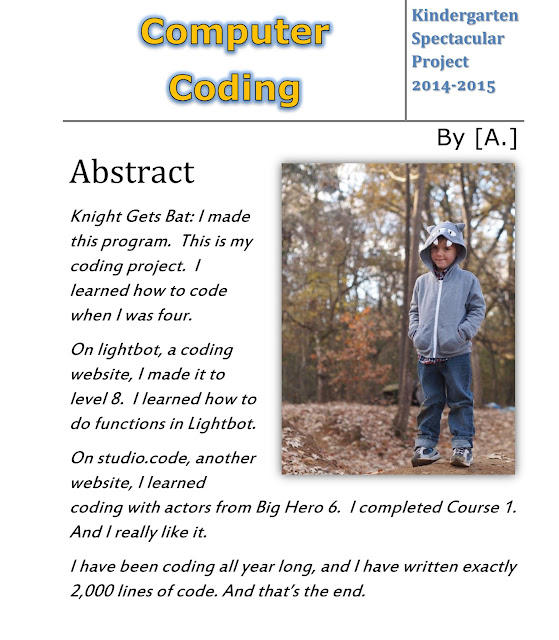 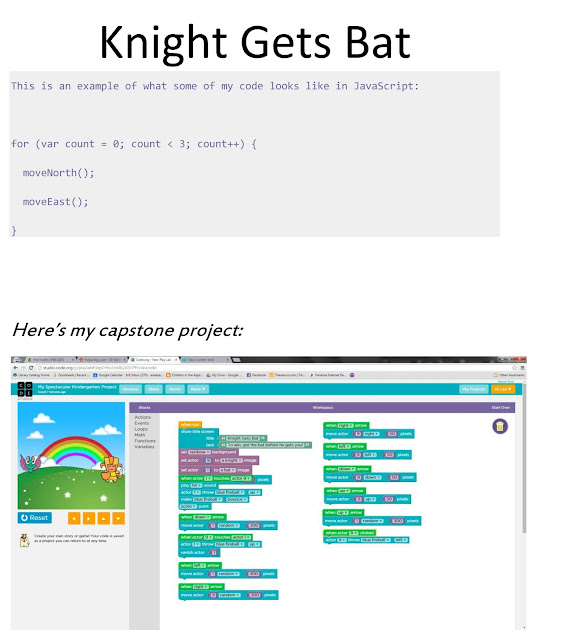 He worked on the project for almost an hour a week.  By the end of the year, he had a context for how computer games are designed and had "written" code for his "own" computer game.  (Here is a link to one of the coding websites he liked.)

Colored pencils were the theme for [C.]'s 2nd-Grade Project.  She used YouTube videos for instruction and practiced weekly.  At the end of the year, she repeated one of the YouTube step-by-step videos to see the progress she had made.  One of her goals was to illustrate a book.  Grandma taught her a little bit during visits.  Her final goal was to compete in an art competition.  She entered three pieces in the county fair and won two first-place blue ribbons.  She was so excited to get some feedback on her work. 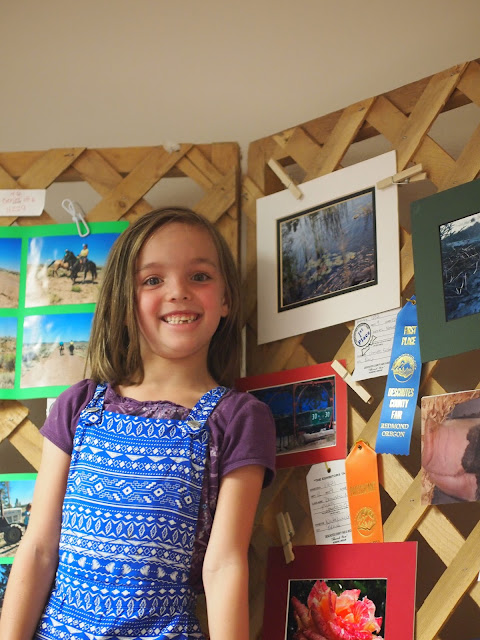 (The photo to the right of her face) 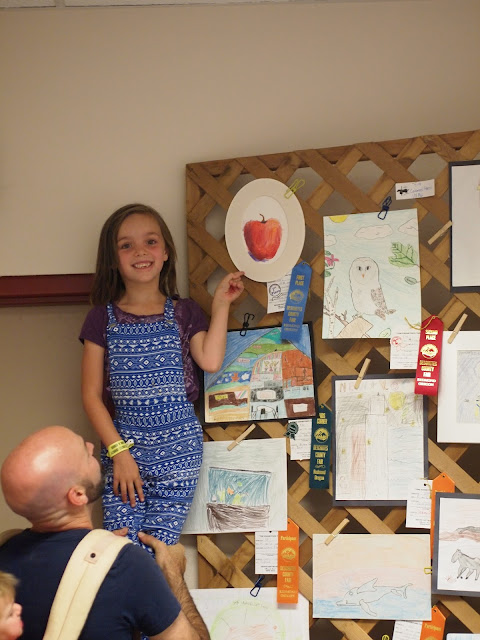 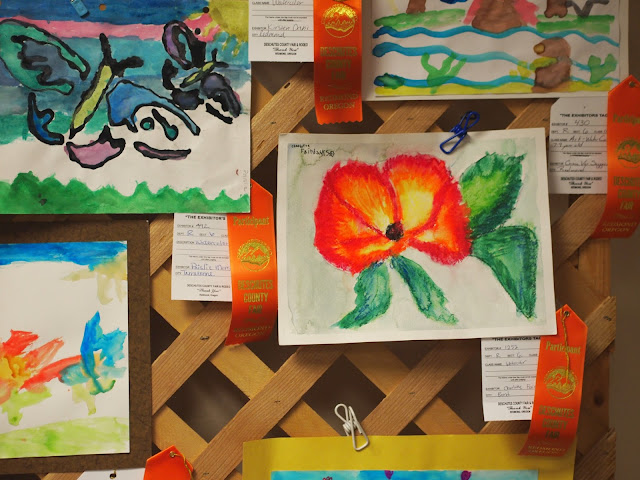 She still draws a great deal, and I'm glad that she put in the extra effort while she's young.

This year, for his 1st-Grade Project, [A.] wants to focus on preparing for the boys' pre-team gymnastics class.  He decided that he needs to practice more at home in order to accomplish his goal.

[C.]'s 3rd-Grade Project centers on reading.  She'll be competing in "Battle of the Books" with some friends from co-op.  She just got into Nancy Drew.  She still needs to read "20 more chapter books" in order to reach her goal.  By then, she'll have read 356 good books.  That's almost as many as her mother :)

Perhaps using the word "spectacular" is too much of an exaggeration.  I don't anticipate getting in 10,000 hours of deliberate practice with these projects.  They're just a theme for the year, one which keeps our eyes open for opportunities to study something more deeply. I simply needed to remind myself to get behind the passion of these kids, to see the bigger picture of their lives, and to let them gain educational value from the things they love innately.